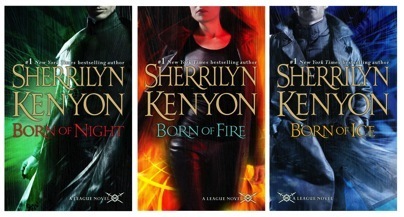 Yes, Ash will continue to be a vital part of the series. He will make appearances when and where necessary and be his usual mysterious self. At this time, I don't have an additional book planned for him, but I never say never. These aren't discrepancies. As in the real world, the characters change year to year. They can be any height or hair color or eye color they choose and If she is freed, the world ends.

I keep trying to come up with another solution, but so far It doesn't look good for us :. It's called hatred and it has to do with a mistake Savitar made centuries ago.

That being said, she was never disloyal to her husband, Archon. In spite of his infidelities, she loved Archon right up to the moment she turned him to stone. I don't know. She's one of those characters that I can't forgive at the moment. While I feel badly for her, it's not so much that I want to redeem her.

We will see. We, alone, stand between mankind and those who would see mankind destroyed. We are the Guardians. Our souls were cast out so that we would not forewarn the Daimons we pursue.

Yeah, yeah. You want to know what a Dark-Hunter is? We are what the intro says. We are the scary things that go bump in the night. And we love every minute of it. You just might be.

The question is…is it something evil or is it one of us? In the world of the Dark-Hunters nothing is ever as it seems. Life and death both take on a whole new meaning as this immortal cadre of warriors fight to protect mankind from those creatures and demons who would prey on us.

There are questions in every book that will be answered in the future. The one thing I ask readers to keep in mind is that every story has at least two sides. Events are always clouded by perception, conclusions and emotions. If two or more people experience the same exact event, they will come away with two entirely different tales about it. My series is no exception. Each character will have their own unique take on every event. Sometimes they will contradict each other.

Much like my sister and I tell two different versions of an event with I was in 4th grade. Her best friend and I were playing vampire. When Virginia went to bite me, she said. Are you anemic? She says I was too young to understand what anemic meant and confused the word with atheist.

Of course, since I was the one who responded, I know for a fact that I knew what anemic meant I was first diagnosed with anemia by my doctor at age five and have been treated for anemia all my life. Then of course, there are those people who flat out lie about events to cover for themselves or others or lie for reasons only they understand and I know you all know them, too.

Apollo is one who often fabricates things in the series, to save face and to wound.

Believe me, in the DH world even the lies have a place. Likewise, you will see different aspects of the characters through the eyes of others. But again, we are all that way.

Our friends have an entirely different view of us than our enemies do. To me, these are the things that make all of my series and characters seem real. They are slices of their world and of their lives.

Avoid taking the life of an Arcadian or Katagari unless they are offered to you as a sacrifice. They tend to have very large families that will hunt you down and kill you. On that note, remember, they can travel and kill in daylight. In fact, avoid angering anything that walks in daylight.

They tend to break into our cribs and expose us to light. Kill them, eat them and move on. For a great show, drag them inside and watch what happens. You can only kill a Dark-Hunter by exposing him to daylight or by decapitation.

Anything else just pisses them off. If you see someone with a bow and arrow tattoo, walk on by. Hang with the Goth crowd, we tend to blend and they think our fangs are cool. Not to mention Goth chicks will gladly ask you to bite them.

Avoid polyester and plaid. No real reason other than you just look stupid in it.

Avoid the Dark-Hunter called Acheron. There is no such thing as escaping or defeating him. He will kick your ass and laugh while he mops the floor with you. Once you go Daimon, do not share this knowledge with any non-Daimon.

And if they do, kill them. Karones— They are usually found in North America. Mostly the US and Canada. Unlike most of our people, they tend to frequent cooler climates. Athenians—They are mostly found in and around our native homeland of Greece.

They are marked by sun symbols of all sort. Delphinians—They are our Oracles.

Found throughout the world, it is believed they can summon the bolt-holes at will. You can find them by the dolphin tattoo or jewelry they all carry. Polluxians Cult of Pollux — They are the strangest of Apollites in that they all swear an allegiance to die on their birthdays as Apollo decrees.

Not well liked by other groups, they are usually found in remote areas. Mavrovian—They are located in the warmer climates and many of them live in and around the Mediterranean. They are secretive, but we are told many of them carry the mark of the lyre.

Kalasian—They are our angels of mercy. Found all over, they usually live among the humans, but are willing to aid any Apollite they find. Many of them are located in the Arcadian or Katagaria sanctuaries. Spathi—they are our warrior class. No one knows who they are or where they come from.

They are mysterious and powerful. It is said one true Spathi can annihilate a group of Dark-Hunters easily. The true Spathi are identified by the mark of a yellow sun that holds a black dragon in its center. Their leaders are Stryker and Zephyra. The weakest of the Daimons, they prey on humans who are criminals and predators. Dayslayer—we have been told of these since the dawn of our history.

No one has ever seen a Dayslayer who is able to walk in daylight. But we believe they exist. It is also believed that one day the one true Dayslayer will come and unite us all so that we can take our place as the rulers of the earth.